Suetonius on Augustus's Looks and Phrase-coining 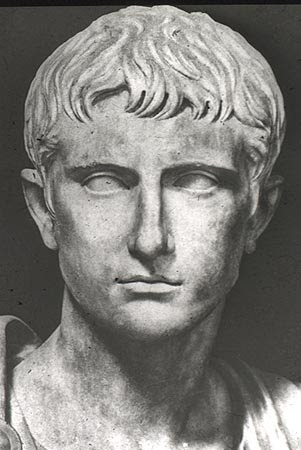 "Augustus was remarkably handsome and of very graceful gait even as an old man;but negligent of his personal appearance...body and limbs so beautifully proportioned..."

And he always had bad hair days?

"He cared so little about his hair that, to save time, he would have two or three barbers working hurriedly on it together and meanwhile read or write something..."

His countenance apparently had mysterious powers...

"He always wore so serene an expression, whether talking or in repose, that a Gallic chief once confessed to his compatriots: 'When granted an audience with the Emperor during his passage across the Alps I would have carried out my plan of hurling him over a cliff had not the sight of that tranquil face softened my heart; so I desisted.' "

"Augustus's eyes were clear and bright and he liked to believe that they shone with a sort of divine radiance: it gave him profound pleasure if anyone at whom he glanced keenly dropped his head as though dazzled by looking into the sun."

And apparently he coined his own phrases...

"Augustus' everyday language must have contained many whimsical expressions of his own coinage, to judge from letters in his own handwriting. Thus he often wrote 'they will pay on the Greek Kalends' which meant 'never' - because the reckoning by Kalends is a purely Roman convention. Another of his favourite remarks: 'Let us be satisfied with this Cato!' - meaning that one should make the most of contemporary circumstances, however poorly they might compare with the past. He also had a favourite metaphor for swift and sudden actions: 'Quicker than boiled asparagus'."

"Quicker than boiled asparagus"; now that is fast, especially for those of us that like our vegetables al dente.

Recipe for the very finest boiled asparagus:
Take one large bain-marie or other steaming apparatus. Bring to the boil.
Take a sharp knife. Run out of your house into the garden, heading for the asparagus beds.
Rapidly decapitate the finest, most tender asaparagus spears.
Sprint back to the kitchen, depositing spears into bain-marie.
Steam briefly.
While steaming, open a bottle of exceptionally fine Trimbach Reserve Gewurztraminer.
Melt a small amount of butter.
Annoint asparagus.
If you've timed it properly at this point the doorbell will ring & your dinner guest of choice will arrive, looking exceptionally desirable.
Well, what are you waiting for . . . ?